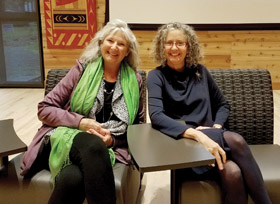 Clear Blue Commercial, of Petaluma, aimed at becoming a B Corp from the outset. A full-service brokerage, sustainability, consulting and project-management firm, it was founded in 2014 and is dedicated to saving the planet through real estate. Carolyn Pistone, president and managing director, observes that people don’t necessarily think of commercial real estate in terms of sustainability. “Buildings are a line on somebody’s spreadsheet,” she observes. She reports, however, that commercial buildings are the largest single source of carbon emissions in the world, and Clear Blue looks for ways to improve their clients’ properties by making them environment-friendly while also saving money. At one building, they converted all the lighting to LEDs, replanted turf with drought-tolerant plants, installed drip systems, used non-VOC paint and added an electric vehicle charging station. In doing so, they added amenities that attracted clients, reduced carbon dioxide emissions and gave employees a nice perk. “As a landlord, you’ve given a differentiator to your building, and you’re saving money on top of it, because you’re saving all that energy,” Pistone points out. “We’re out to prove that sustainability more than pays for itself and is essentially the building block of our future economy.”

At another building, which needed a landscaping makeover during the drought, a contractor submitted a plan that would take 32 years to result in savings on water. It wasn’t practical, so Pistone contacted the water agency and the City of Petaluma and launched a Mulch Madness project that used volunteer labor and got donations of mulch, compost and components for a drip irrigation system. The contractor who missed out contributed equipment and labor. In addition, Clover Sonoma donated yogurt, massage therapists provided chair massages and three bands played. “We made it a festival,” she says. As a result of their cooperative effort, the turf-conversion project saves 3 million gallons of water a year, and it took only one day. “We made this wonderful change and brought the community together to take action,” she says. It also gave the property’s owner, who lives outside the area, a new understanding of a community that is resource-challenged.

With concern for government, community, workers and the environment all involved in its practices, Clear Blue Commercial embodied the principles of the B Corp philosophy, and “We wanted to be a B Corp right away,” says Pistone. The company didn’t have a history, though, and so it didn’t have enough information for the assessment and had to wait until 2016 to receive certification. When the time was right, however, it was prepared. Compiling the documentation B Lab requires is a rigorous process. “We were able to get all our stuff together fairly easily,” she says, adding that it took two to three months and required the company to make some changes. For example, one of the questions they had to answer during the certification process was whether employees have pro bono time to do work for charities. Although Clear Blue did have such a program, they had to document their policy and distribute it to employees to formalize it so they could earn five points on the assessment. It was one of several things Clear Blue already did informally because it’s what they believe in and who they are, but to get points, they had to write all of them into the company’s policy so they would be specific and binding. “It’s a big commitment,” she adds. “If I go to a store and see that B Corp logo, I know instantly what they’ve had to do.”